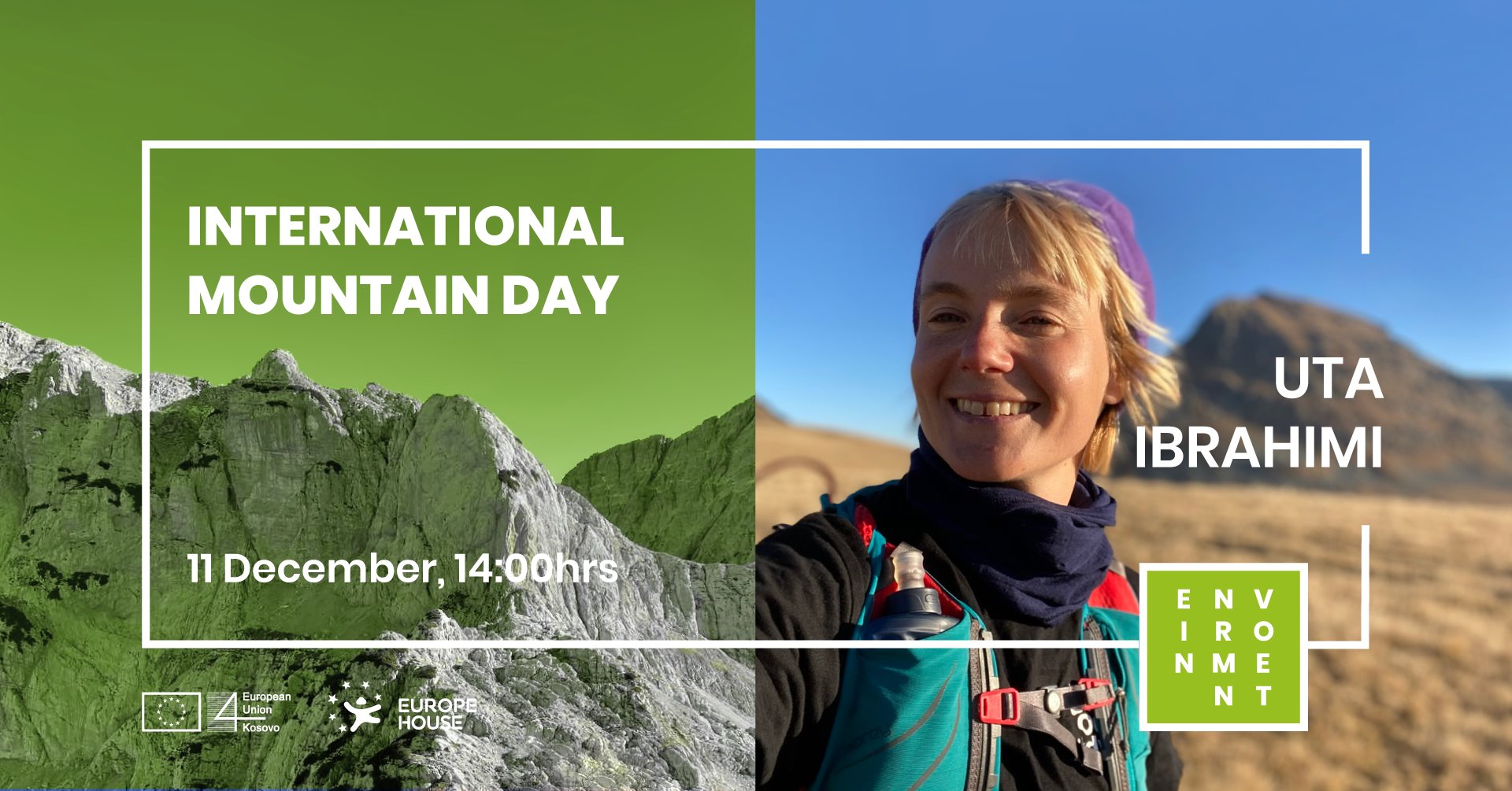 Europe House offers spaces where citizens can attend debates and seek information on different topics and well as the European Union.

On International Mountain Day, 11th of December, Uta had the joy to be the guest for a live Facebook event hosted by Anette- Fath Lihic a representative of Europe House.

Who else has more credibility to speak about mountains other than Uta – said Lilian. Uta is not only a mountaineer but an SDG Champion on gender equality and climate action, she continued.

Considering that this year’s theme for International Mountain Day was Biodiversity, Lilian asked some very interesting and important questions to Uta regarding the biodiversity in the mountains of Kosovo.

You can watch the live interview here. Or read along..

ANETTE: Through your alpinism activities, you seek to raise awareness about nature, the mountains, and human rights particularly in Kosovo and Albania. What are the most urgent issues when it comes to mountain biodiversity?

UTA: Well, if you truly find peace in nature and enjoy all the beauties it has to offer you, you should also be in charge of offering some care and responsibility in exchange. Lately, on our hiking trips, also those organized with children, at Butterfly Outdoor Adventure we always promote zero waste by showing children how to not leave any traces even during camping, and we take modest cleanup actions on trails up to the peaks.

Some of the biggest problems to mountain diversity is most definitely deforestation, the tendency to urbanize every place by building highways or roads, resorts, villas all this causing more noise pollution, garbage, hunting, etc. All these directly affect the life and environment of many endemic species in Kosovo.

ANETTE:  Can you name a few animals living in the nearby mountains, which ones are threatened, and why?

UTA: I’ve been very lucky to spend time in the mountains of Kosova lot, especially during the isolation period from the Covid-19 outbreak, and exactly because, during this time the world took a deeper breath and retreated from all the pollution, I also got to see more activity from animals. For example, a short walk to Germia and I would see many squirrels, some very unique type of birds which I had never seen before, owls, turtles, etc…

Whereas in heights and bigger mountains you will most likely see goats, sheep, Sharr dog, foxes, etc. I’ve never seen a bear, wolf, or wild boar, even though they are quite typical for this area. But on my last hike, I saw a bear which wasn’t too far away from us, and it was the most special feeling I’ve ever felt. I was so happy to see a bear for the first time in Kosova.

ANETTE: How can people protect animals living in the mountains?

Even though deforestation and hunting are qualified as illegal acts by law, unfortunately, the law is not applied at all, and for this, the state is to behold responsibly.

For instance, I remember how different one of the Sharr mountain ranges-Luboten used to be before, let’s say 10 years ago, there was only one path to reach the shepherd huts which was also a natural road within the forest. Now there are another ten paths built giving access to people only to freely and easily cause deforestation.

The most concerning part are that if one tries to warn or threaten them to report, they end up putting their own life at risk.

ANETTE:  You have climbed Mount Everest as the first Albanian woman. This is a huge success. However, climbing Everest has also become a big business. Approx. 800 people attempt to climb “the roof of the world” per year. The side is becoming more and more polluted. How do you deal with this contradiction – on one hand being an environmentalist and on the other hand taking long-distance flights and perhaps adding to the pollution by being part of this tourism industry?

UTA: That’s a question I’ve made myself and others as well. I’ve been thinking about this issue but there are many arguments that justify what I do. On my first journey to EVEREST, I realized that Khumbu and Nepal were so different from what I imagined they would be. They were highly polluted, even on the heights. At camp 4 you can find 20-year-old remains of garbage of the alpinists. There are many foreign projects that take care of the environment and organize cleanup activities.

I personally have always been highly conscious before choosing the guide company and have always chosen one that is environmentally conscious. We had to pay an extra fee just so the problem of the remains would be fully covered, such as cleaning the area where we camped. I always gladly join these activities or sometimes encourage and inspire others to help me clean around.

When it comes to flights, I had taken two flights per year to Nepal, and this was mostly because I had to meet the deadline of an expedition, and choosing another way of transport wouldn’t make it possible for me to reach on time. But Nepal is a very very far destination. Whereas in Kosovo and region I always choose the bike or public transport.

Considering that people take more than 10 flights for the year just for a short destination business trip or even shopping, going to a distant continent such as Asia, to achieve something that will have an effect in a bigger cause, I think justifies and minimizes any harm done.

ANETTE: The ongoing COVID-17 pandemic is a major shock for the world. Many argue, that it has also its positive effects. We have seen nature recovering rather quickly during lockdowns. What can we learn from the pandemic in terms of environmental protection?

UTA: What we can learn from this time is that we are all equal now. Nobody can travel. Others will understand the struggles of some populations such as Kosovans and the hell they go through for having to get visas for travel.

And after all the difficulties faced, I think people realized that nature is what remains, and it’s the home that will always welcome and make life easier and more fun. Being more in contact with it and watching it thrive from the reduction of pollution, I think humans are now more aware of the damage we are doing.

They also realized that biking and walking to destinations is not as difficult as they imagined, the only thing they had to do is give them a chance.

ANNETE: My last question, leads us back to the Balkans and in particular Kosovo. You know about the ongoing debate about mini-hydropower plants. On one hand, the produced energy is “clean” and on the other hand, those hydropower plants can destroy a lot. Can you comment on that subject?

UTA: This is a very complicated topic, especially for someone who is not an engineer. Each type of power production has its consequences to the environment. In the same way that Hydro Centrals damage nature, termo production has hugely damaging effects. On the other side, research is showing that also solar panels contain a material that isn’t very environmentally friendly… on the other hand wind turbines are killing many birds and other flying creatures.

So, in conclusion, I think that to get a correct answer on this we need the opinion of an expert. But I believe that power is an essential need of humans and science needs to find innovative ways to produce power and keep the balance between production and protection of nature.

But I truly believe that the only way is activism. By being active citizens we raise our voice and address issues to the relevant instances, so I think we should all individually take responsibility and act to inspire change.

ANNETE: Very true, I agree. Considering that environmental advocacy can also be applied in business, and lately we talk a lot about green recovery from the pandemic and also if you allow me to mention the EU Green Deal is the biggest policy which will lead and help a lot of sectors in the coming years.

Here in Kosovo, we have started an initiative three years ago, for which I’m sure you’ve heard or even participated, I’m talking about the Kosovo Sustainable Development Week, through which we wanted to raise awareness and to work together and networking different partners such as international organizations, ministries, EU, Ngo’s, Embassy to really highlight the importance of environmental protection and the possible cooperations to reduce these concerns.

ANETTE: Uta, it’s been so much fun. I will never forget the line where you said ‘ I was so happy I met a bear in the mountains’, you probably are the only person to be happy to stumble upon a bear while hiking. Thank you so much for the discussion.

UTA: Thanks for inviting me, it’s been too much fun for me as well.