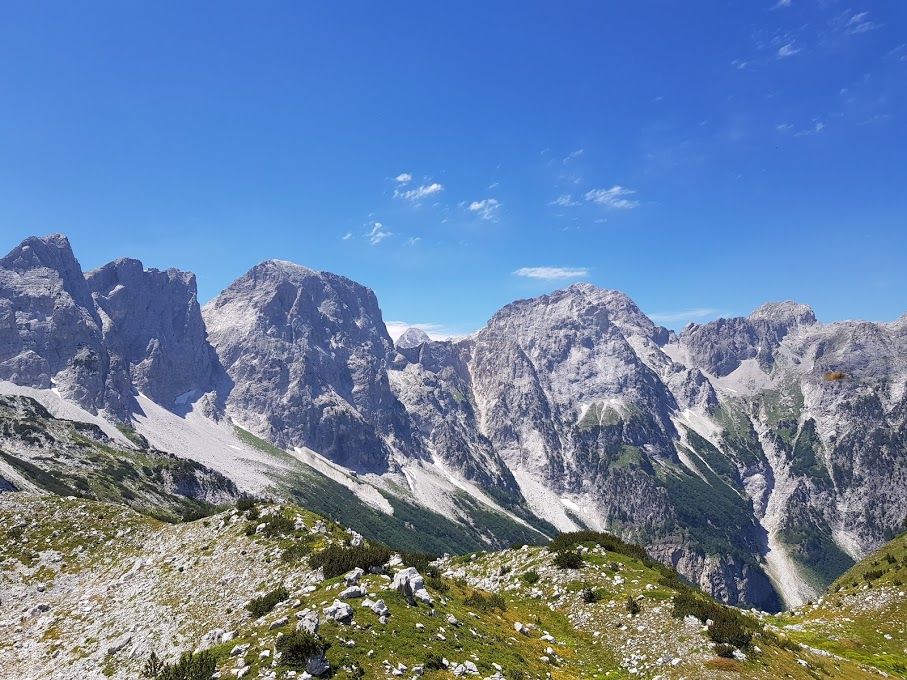 Awe-struck by day and night – Via Dinarica, Kosovo&Albania

Via Dinarica is an amazing trail in the Western Balkans, nearly 2,000 kilometers long, which connects countries around Dinaric Alps and Sharr Mountains. It is an adventurous walk through different cultures with heritage sites and the last of the continent’s unspoiled and most beautiful landscapes.

5-bed breakfast overnights in a guesthouse

All transfers according to the itinerary, with own minivan and an English speaking professional driver
Transfers of the loads with a horse (bags)

The Via Dinarica links Kosovo, Albania, Montenegro,Croatia, Slovenia, Serbia, Bosnia and Herzegovina, creating a 1,200-mile path, exploring the spine of the Dinaric Alps through the Balkan Peninsula. Via Dinarica is Outsides Magazine’s Best New Trail in 2014, Paste magazine’s best trekking path in 2015, and a must-see both Wanderlustmagazine and The Guardian in 2016, and also National Geographic Traveler‘s “Best of the World” destination for 2017.

Even though Kosovo is a newly formed country, it has made very much progress by the will of its people, who never gave up no matter the hardships they faced.

There is a huge assortment of food choices in both countries, starting from a very simple but tasty fast food pastry to the amazing fish and seafood restaurants, especially in Albania. The fruits and veggies are mostly organic everywhere you shop. Meeting new people in both countries is going to be great fun as the people are extremely positive and generous.

From the airport of Prishtina, you will be transferred to the capital city, Prishtina. You’ll be taken to the Prishtina Hostel where you will spend your first evening. We will spend the first day discovering the best parts of Prishtina. During the day, you will enjoy some free time to explore the city with its’ many cafes, restaurants, fountains, and statues – a re-introduction into typical city life after your tranquil escape.

In the second half of the day (4 h) we will organize a culture trip for you, visiting Prishtina (monuments, mosques, churches, old bazaar, and the old city of Ulpiana).

We will be happy to show you our charming city.

We will stop in Shkodra for one hour for a short walk and lunch – burek. The city is one of the most ancient cities in the Balkans and the fourth most populous city in the country and exerts strong influences in culture, religion, arts, and entertainment of northern Albania. After that, we will switch the transport from MiniBus to 4×4 cars. Our drive to Theth will be very interesting, the sights will leave you speechless. Theth is an absolute gem of Albanian highlands, the view from Theth will leave you awe-struck because it offers a clash of the best Albanian and Kosovan mountains. It also offer a wide range of activities to do such as swimming, visiting many caves, camping and eating the delicious spotted trouted of the Okol river which is envied for its cleanliness and color.

After the accommodation, we start the first session of Yoga in Theth – outdoor, and the first meditation session latter.

2 hours Hiking and one yoga session

Your hike and yoga trip will continue to Theth, which is at the heart of Albania’s wild Accursed Mountains. We will explore the timeless village of Theth and visit some of its most impressive places and objects.

After we arrive at Theth, we will settle into a guesthouse where we will have a traditional dinner cooked by a local family.

Afterward, we will have the first Yoga session and then we continue walking around the village.

After a good night and a night of very quiet and comfortable sleep, early yoga, and breakfast, we will be ready to start hiking from Thethi to Valbona.

The most popular trail of all Dinarica trips is the hike from Thethi to Valbona. A relatively hard and long hike is rewarded every moment with the pleasure of enjoying the spectacular landscape. The view from the top of the mountain is breathtaking. The hike will be quite long, around 8 hours and the highest point that we will be reaching is Qafa e Valbones when we see both valleys, Thethi and Valbona, where we will have lunch and a break.

8 hours Hiking and one yoga session

After early yoga and breakfast, we are ready to start our journey to explore the area furthermore. As we are getting closer to the Kosovo border, we will drive for 1 hour from Valbona to Qerrem (small village).

From this point, we will start to hike to Doberdol, another beautiful small village near the Kosovo border. During this part of our hike, we will hike deeper through more hilly terrain. The view is magical, and we will be able to see some of the most beautiful peaks, Kollata Peak, and the whole Kollat range.

7 hours Hiking and one yoga session

After early yoga and breakfast in Doberdol, we will start hiking towards Kosovo, passing the border. At some point, we will be close to the highest peak in Kosovo, Gjeravica. During this hike, we will also see some glacial lakes.

Down at the village, we will stop at a shepherd’s house to have our lunch bags and to prepare for a drive to Junik, a small town, and will be accommodated at Kulla – Traditional house.

Note: The actual itinerary and the duration of the activities are subject to change due to group abilities and preferences, weather conditions, and forecasts, road conditions, etc.For further details about the itinerary, please write to us on info@butterflyoutdoor.com 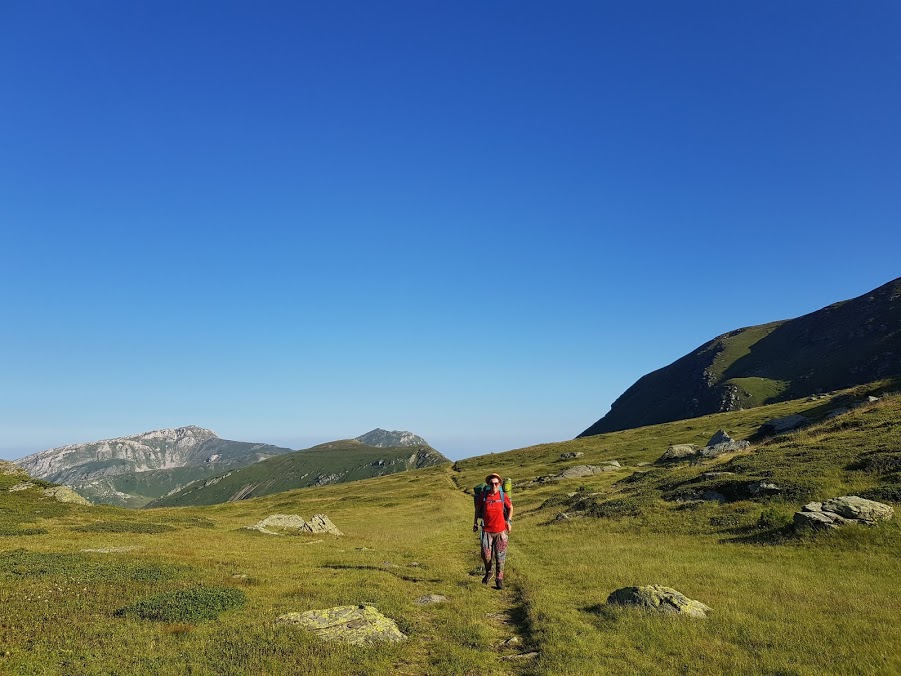 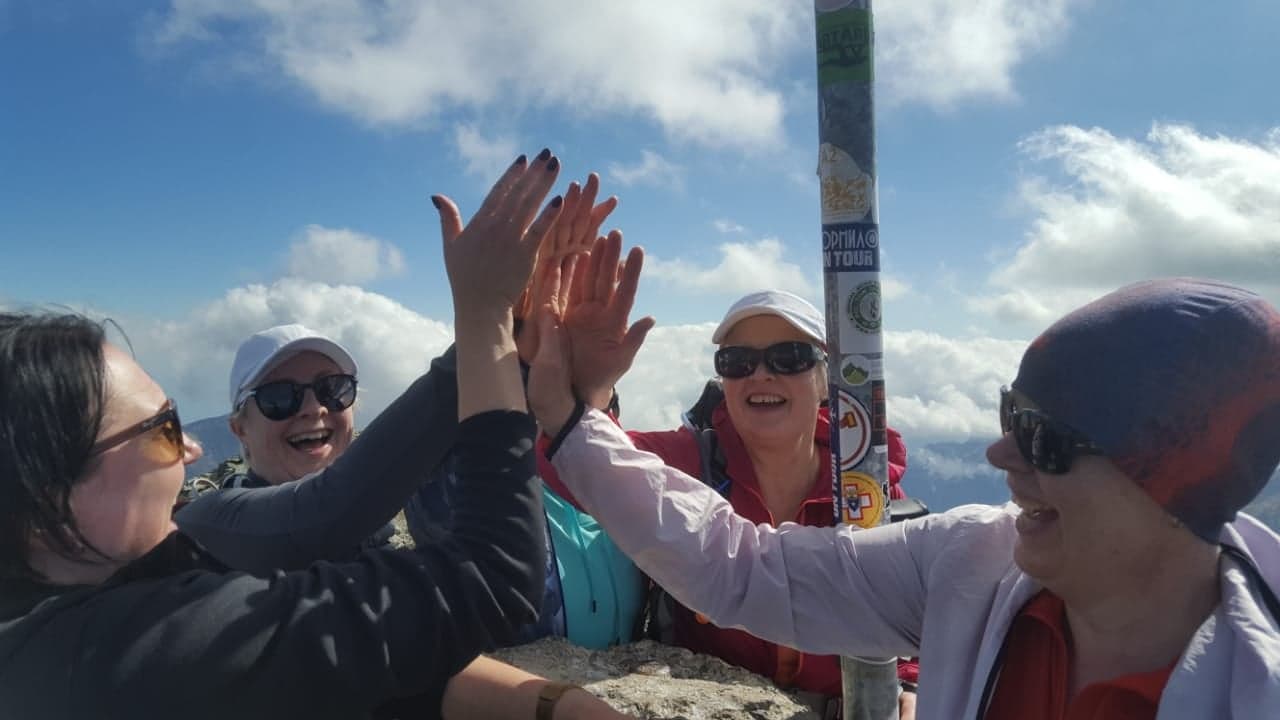 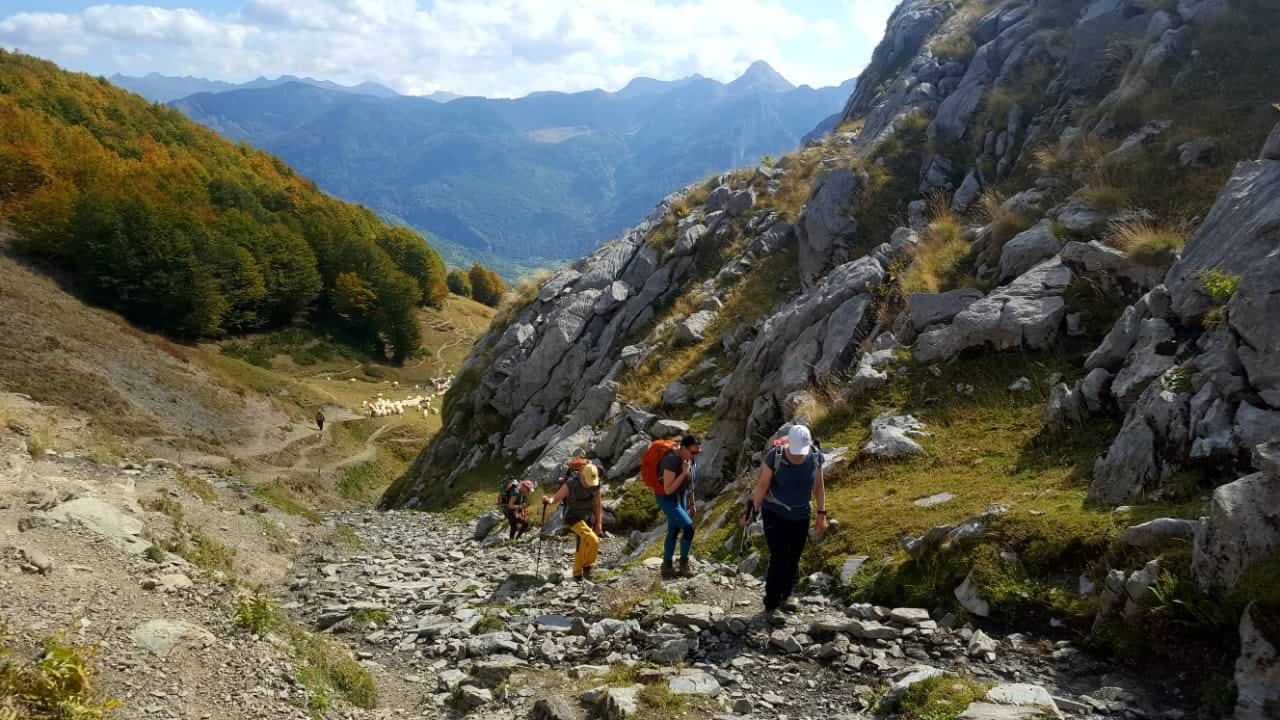 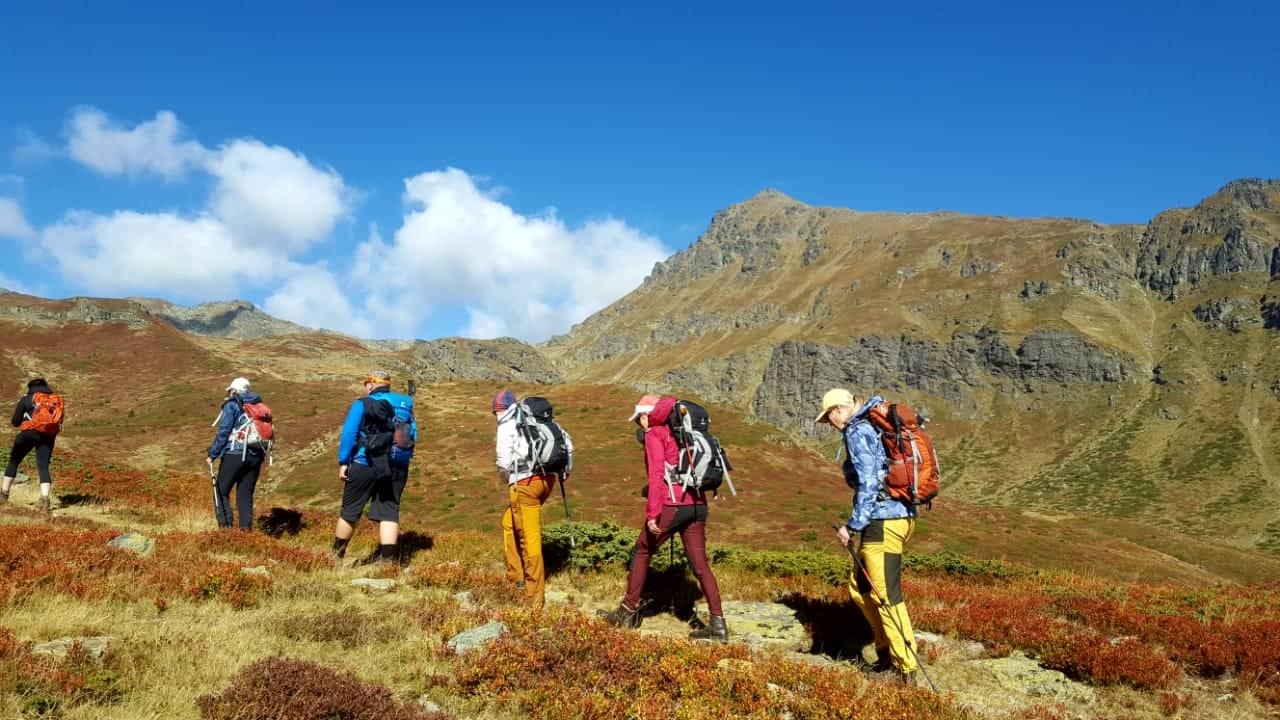 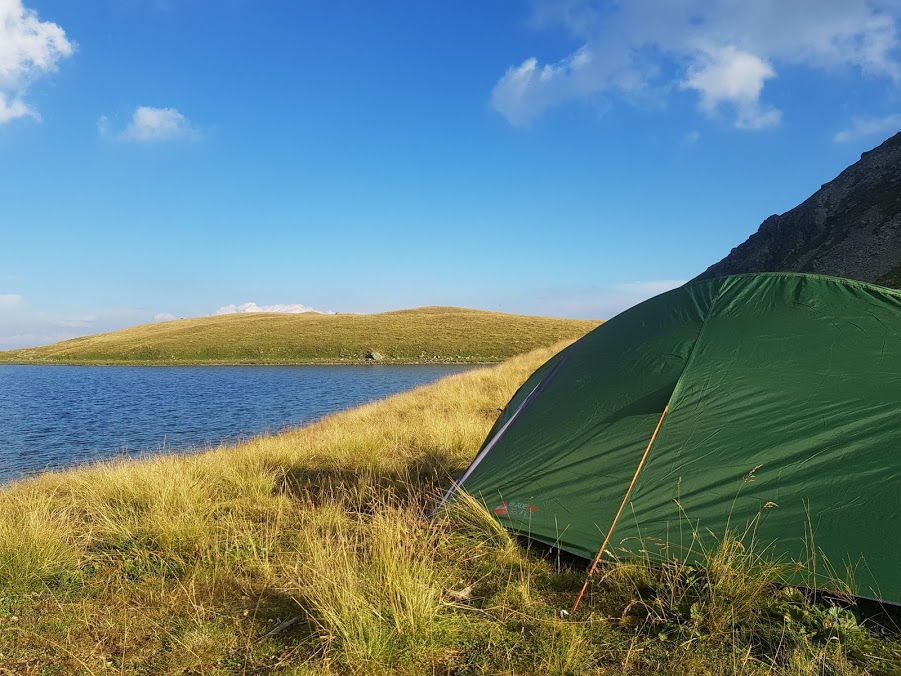 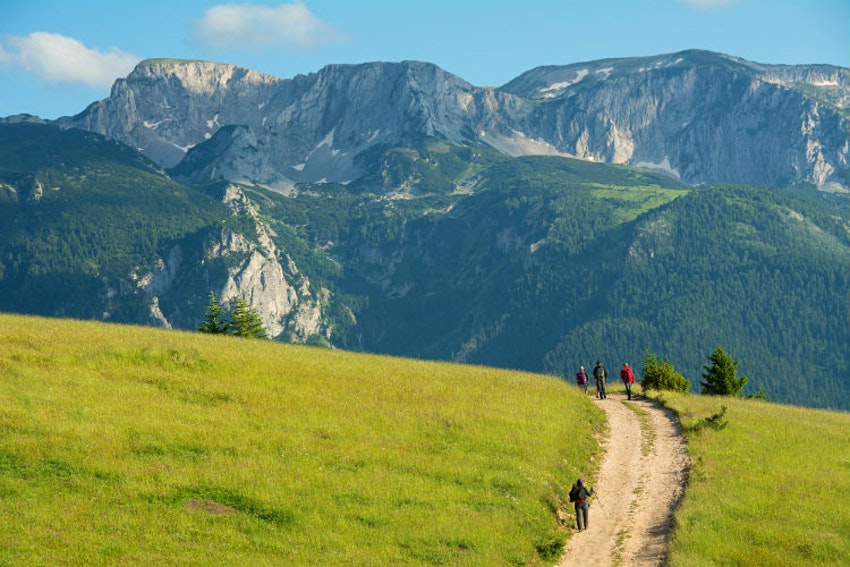 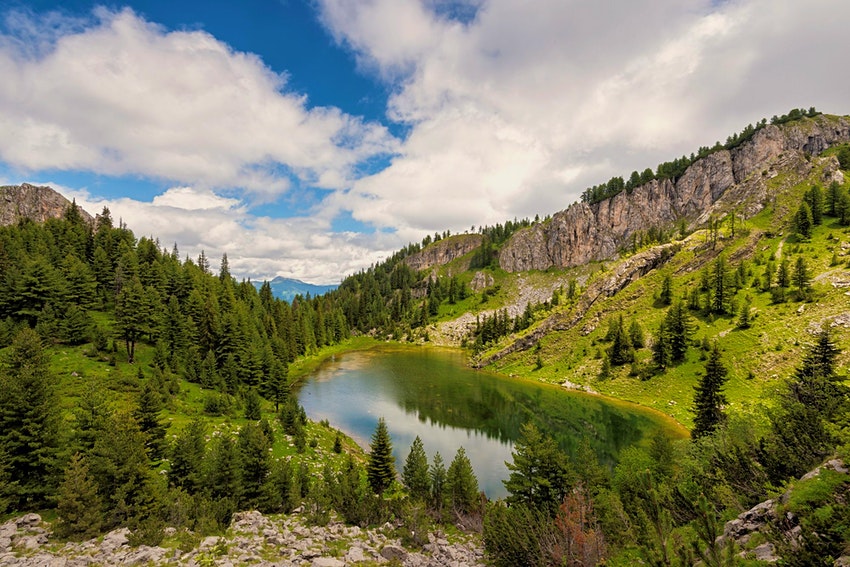